Full range of services to get the most out of your Virtual Production!

Whether for one day, one week, one month or even more time; rent your EZtrack® system provided in its Pelicase, ready to be deployed to your studio’ set.

You can also get access to our complete tracking service delivery that can be provided by our technical production team to your set for processing Previs or broadcasted live-to-air shows.

FLEXIBILITY Rent your system per day or per week or per month. 3D rendering rig(s) and camera(s) with encoded lens(es) are available as options SAVE TIME & EFFORTS One or more technician(s) from our team will ensure tracking operations onset
FLEXIBILITY Rent your system per day or per week or per month. 3D rendering rig and camera with encoded lens are available as options TRAINING PROVIDED Our technician will train your team onset over a two-days program
This plan is recommended for longer-term projects – or – in case you want to take time at evaluating the system before considering a purchase. It does include : • SYSTEM: One EZtrack® system provided either in Essentials or Complete Studio bundle plan with a temporary activated license. • REMOTE SUPPORT PROVIDED: our team does remain at your disposal to meet every technical question you may have.
Lens calibration on set is not an easy task! Our team has developed in-house calibration tools. Should you need to calibrate one or more a lens(es) for a project, we can calibrate them for you, whether your project implies EZtrack® system or not. Per lens calibration process usually takes from 1/2 day to 1 day.
Is your activity bringing recurrent needs for lens calibration and you are keen to internalize this task? If so, then we are happy to provide you and your crew team with a dedicated Masterclass! This is a 2-day masterclass for which we will provide you with our specific calibration toolkit and dedicated tutorials, so that you can stand on your own two feet at the end!
ASK US FOR PRICING & INFORMATION

Complementary to every system purchase, we propose our dedicated on-site training program for EZtrack® so you can learn and save time, while having your setup ready to operate after a few hours!

Objective to get full operating tracking data by the end of the day!

– Learn of the various parameters from the main EZtrack® user interface,
– Discovery of the advanced features,
– Go through the tracking duty within a specific 3D workflow over EZtracking as our Live Link Plugin for Unreal Engine 4, or your favorite live 3D pipeline such as Zero Density, Aximmetry etc..

Get a comprehensive view of a topic thanks to our online training formula provided over a 5-hour credit time split as two sessions of 2.5H each. You will benefit from the direct assistance of one of our technical engineers that will dispense his advanced knowledge and further guidelines.

Following reception of the system at your studio, this module aims at providing guided step-by-step system setup & initial configuration, go-through the main tracking features of the EZtrack® user interface, while introducing you also the EZtracking Live Link Plugin for Unreal Engine 4.

Fine-tune your expertise in processing real-time visual compositing into the Unreal Engine 4! Our technical engineer will dispense his knowledge on how to combine visual assets from different sources into a single composited image. The training will use your green-screened shots, as they will be combined to CG elements, whereas we can also bring an in-depth look at the Sequencer module to timeline and reuse your tracking data for post-production.

Let us manage the profiling of your optical lens as we can rent from our primary gear provider in France the exact [camera+lens] configuration you are using onset! The profiling process generally stands from 1 to 2 working day(s), with purpose of delivering you with the corresponding lens profile file to load into your favorite render engine. 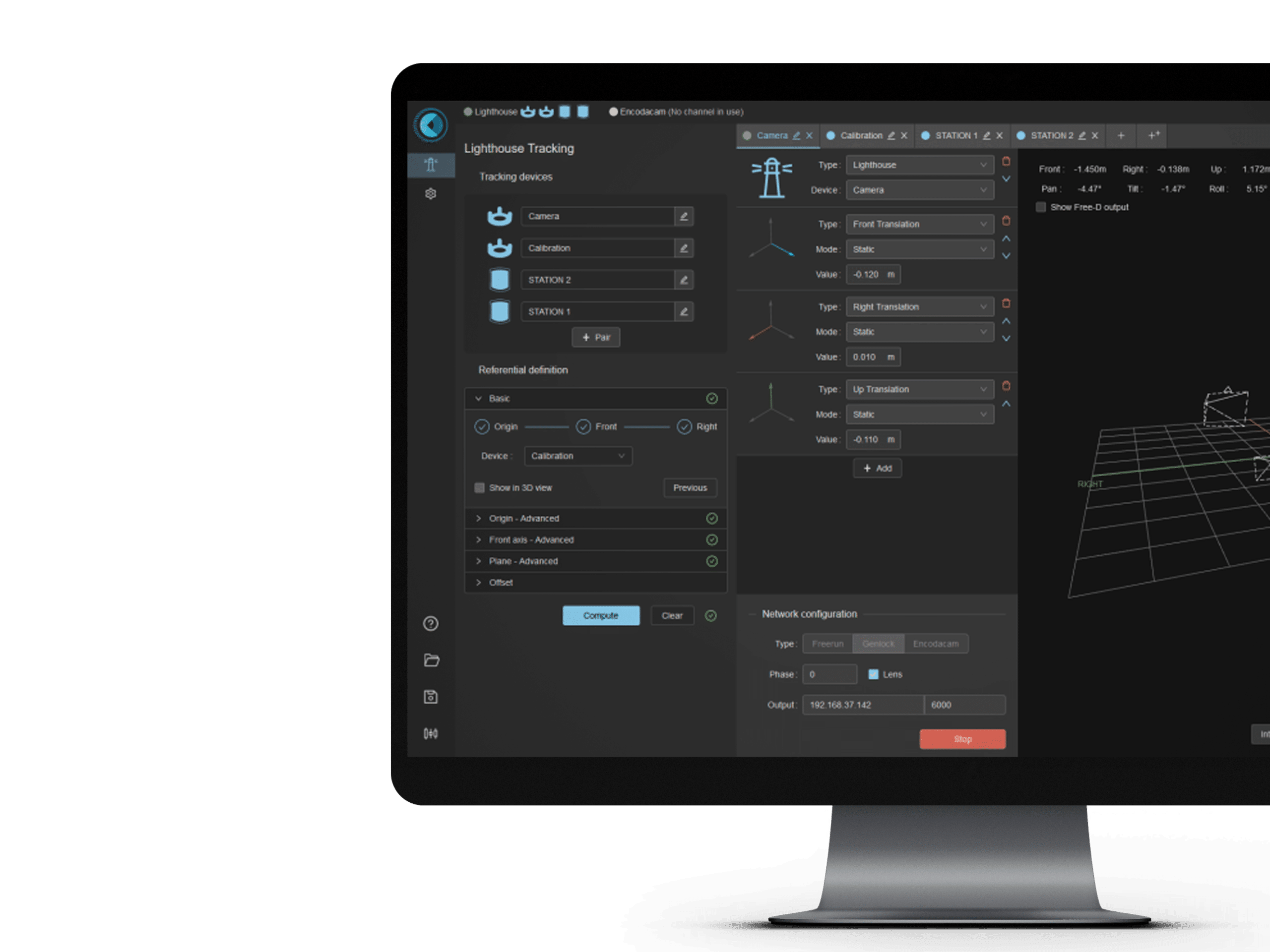 Relying on an experienced task force empowering 40+ skilled artists, oARo is able to produce a wide range of virtual assets to enhance your live broadcasted content. From realistic commercials to science fiction, we create your 3D environments upon request, such as among others: • Virtual backdrops and animated environments, realistic landscapes, • Real-time information compositing: motion graphics, leaderboards, animated infographics, • Animated characters or virtual object with VFX-enabled.
At mastering world-class 3D pipelines such as Unreal engine and Unity 3D, our team can create your 3D environments from scratch and produce any kind of content in real-time, from realistic commercials to science fiction! Both our technical and artistical knowledges are recognized for more than 15 years by reputed actors of animation, cinema, and broadcast medias companies in France and internationally.
As a trailblazing studio, oARo operates in the competitive visual space with unique promises of: • Reducing production time, efforts and cost of studios and creative teams, • Providing photorealistic yet optimized 3D content such as virtual assets, backdrops and animated characters, that can be displayed either on green screen or LED backdrop, • Getting access to an efficient workflow without multiple recreations of assets on the fly
Complementary to photorealistic assets creation, we also deliver high-end virtual production capabilities to the sets thanks to our unique yet hybrid production workflow implementing Motion Capture! This is the core activity of SolidAnim, as our mother company: 15+ years of broad experience and two large stages being fully equipped with all year round in France, both available for films or commercials shootings with purpose of meeting international production standards. 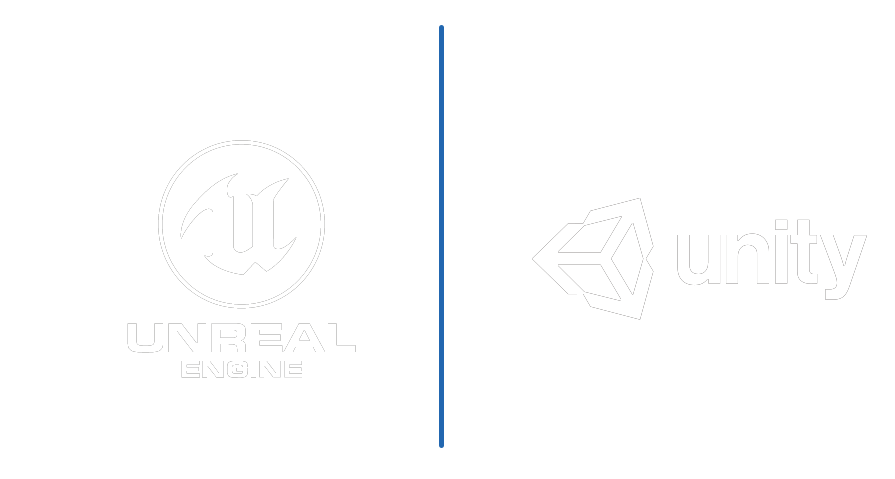 CHECK OUT OUR 3D PRODUCTIONS

Our team of operators handle your onset previz and live shootings 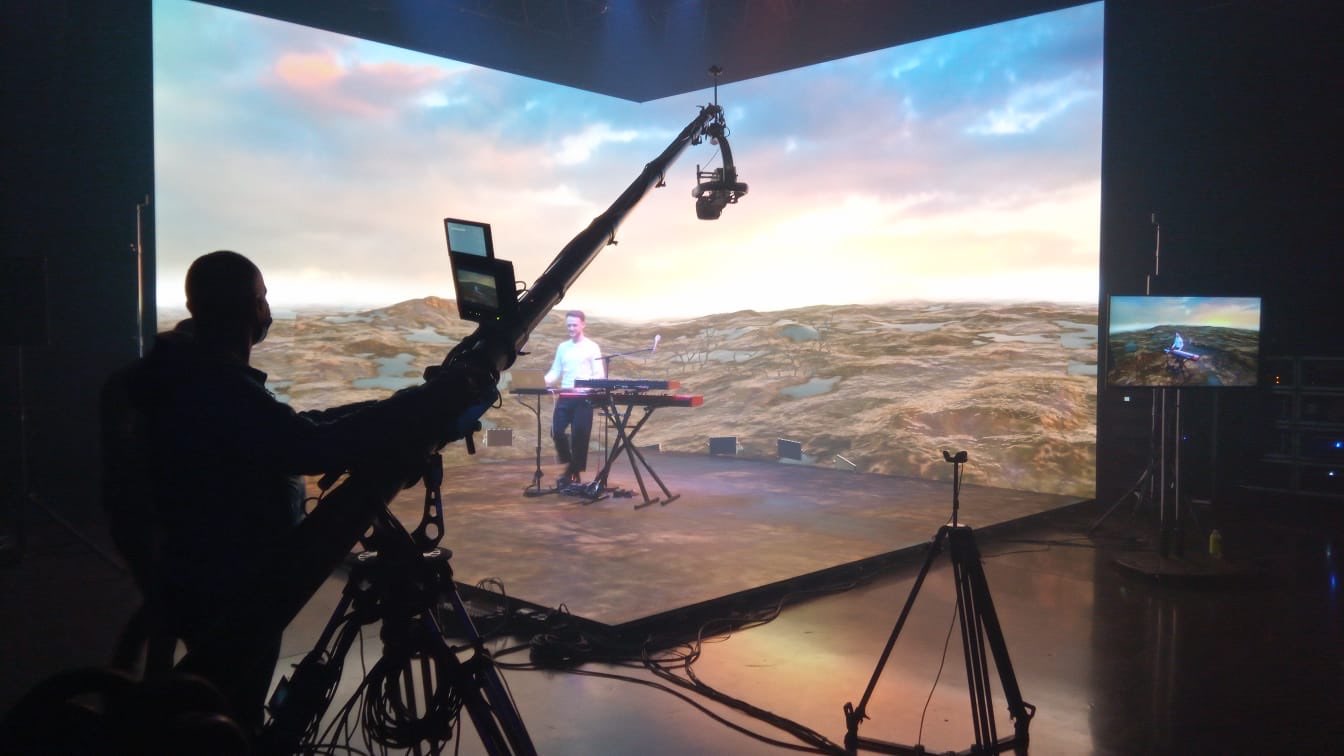 Whether live streamed or not, we can help Corporates and event agencies to produce their live events implementing live 3D in AR with purpose of showcasing to their audience latest innovations and key figures over virtual assets.

oARo service offer can cover a full supervision of the production project, thus,
including:

Our expertise provided to your set, from end to end!

Thanks to both a broad experience in Virtual Production and a qualified network of partners, our team can provide its assistance at every step of the implementation of your virtual studio setup. In accordance with your production needs and types of projects, our mutualized expertise encompass :